A Little Potato and Hard to Peel is a universal story…that is, a universal story about a not so ordinary life. In his warm, smart, and engaging autobiographical solo show, David Harrell delivers a hilarious and insightful look at living with a disability.  He was born in southern Georgia, in the 70s, without his right hand.  His parents, having never known anyone with a disability, promised he would never be different.  He soon realizes, however, the metal hook he wears on his right hand does in fact make him feel different. A Little Potato and Hard to Peel is not so much a show about living with a disability or overcoming the circumstances of his life but the journey to find the awareness to not be defined by limitations. Through his journey we learn to not let ourselves be defined by our own limitations or let the circumstances of our lives peel away the core of our humanity.

For more information on booking A Little Potato and Hard to Peel contact us here.

IMAGES FROM THE PERFORMANCE // Photos by Ken Stein 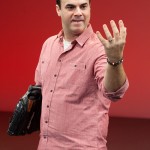 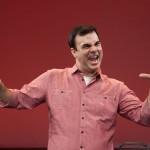 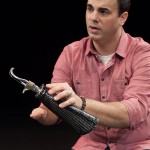 Opening scene from A Little Potato and Hard to Peel

David Harrell is the kind of international solo performer you want at your festival. His show, “A Little Potato and Hard to Peel” is brilliant in it’s honest and heart-felt writing. His performance is flawless and extremely dynamic, as he brings to life all his distinct characters, with great humanity and humour.  He is a consummate professional and super nice guy.  Passionate about his work and the cause it celebrates, helping people with all levels of abilities to soar, David is a great example of the best of solo theatre with soul.

David Harrell is a charismatic performer who can charm audiences from 5 to 95 years old. He is also quite flexible and able to adjust his message and show to a wide variety of venue situations and audience compositions. He held a room of business people in rapt attention in the morning and that afternoon, during an after-school program, he kept 65 at risk children enthralled for 45 minutes. Over and above his prodigious talent, he is extremely easy to work with. I recommend him highly; in fact, I am trying to bring him back!

David Harrell’s A Little Potato and Hard to Peel is incredible. His performance energy is awe-inspiring and something any actor should hope to attain.

We asked David to bring his show to Winston Salem, North Carolina as part of Paper Lantern Theatre Company’s 2013-2014 Season.  He blew our audiences away with his one man show A Little Potato and Hard to Peel.  We received incredible feedback on the show, from our patrons and local critics.  Audiences were deeply moved – to laughter and to tears.  I have no doubt we not only kept our current audience incredibly happy with David’s production, but gained some new followers as well.  It is a unique theatre experience – an example of just how compelling a simple theatre piece can be – driven by a powerful story and stellar acting.

“A Little Potato and Hard to Peel” is a remarkable show, tightly written and, yes, brilliantly executed. It’s an inspiration, it’s an education, it is truly remarkable.”
– Winston-Salem Journal
(read full review) or (pdf)
”David Harrell has a story to share. And his one-man show, A Little Potato and Hard to Peel, is more than a life simply worth telling. It’s told well. With the help of director Kirk White, Harrell draws on the bitterest disappointments and proudest triumphs of his past to craft a performance piece as touching as it is dynamic.”
– Jack Smart Reviews
(read full review)
”…letting us walk with him in his shoes during this hour-long show is edifying and illuminating. He excels at sharing, at helping his audience explore and feel some of what he has been through. I think we’re all of us better for that sharing.”
– Martin Denton, nytheatre.com
(read full review)
”David Harrell is an attractive,engaging, outgoing young man with a compelling story and a knack for telling it that fully captivates audiences of all ages. The genius of this script is that the well-crafted words are Harrell’s own words and story, and no one can tell it any better. This is good diversity-education material that ought to be seen in every school in the state.”
– Jim Cavener, Asheville Citizen-Times